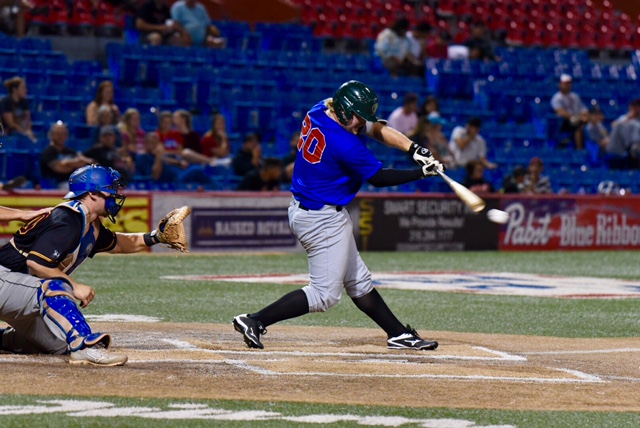 Robert Neustrom got Team USA off to a great start with a first inning triple but it was quickly erased when Aaron Brown drove in two with a double in the top of the second. USA would answer with a run in the sixth on an RBI double from Tyler Crowl and then took the lead on another Neustrom RBI in the seventh. Mulvane wouldn’t go away though, forcing extra innings in the ninth. The Patriots added one in the tenth that was answered immediately in the bottom of the inning. It was a twelfth inning run that ended up being the difference but not before some trouble. The National Team put two guys on without any outs before Sloan Baker escaped trouble and preserved the win.

The Studs seemed intent on breaking out the sticks early and Ryan Budnick was right in the middle of it with a two run homer in the bottom of the first, becoming the first player in this series to hit multiple home runs. Dylan LaVelle added three RBI including a triple and scored onece in the run-rule shortened win. Geoff Brown tossed six solid innings to qualify for the W, only allowing two runs.

The Diamond Dawgs continue their roll with a tournament leading 6th win on Tuesday night. Austin Gehle held the Larks quiet for 5.2, enough time for the offense to roll with a two run homer by Daniel Richardson and a solo shot from Jackson Glenn. Tresten Kennard continued his incredible series with a four hit night in five at bats while scoring twice. He’s hitting .478 for the World Series. Bradley Demco pitched 3.1 for the save and to set aside the spot for the Diamond Dawgs in the quarterfinals.

The Heat put up crooked number in the second and third with four different players each contributed an RBI in the early rallies. But the Waves would not go away thanks to a host of hitters. First, San Diego tied the game at four while Eric Del Prado drove in two and Brandon Stewart added an RBI from the leadoff spot. But it was Trevor Beard who came up the biggest. The Waves fell behind 7-4 before tying it in the bottom of the eighth. Beard then delivered a walk-off single with a runner on second to break the tie and give the Waves a win at 1:30am on Wednesday morning.